We focus on the experience of our colleagues

Continuous Delivery with Jenkins and AEM

36 cyclists rode their racing bikes across Germany in two days for a good cause.

Christian Kupfernagel, a passionate cyclist from Rosenheim, joined the donation tour "Nonstop through Germany" on June 23rd and 24th. He was one of 36 cyclists, who cycled within 40 hours from Flensburg to Oberwössen in Upper Bavaria. 1,060 km had to be covered with the racing bike. Without sleep. With few breaks. For a good cause. eggs unimedia supported the donation tour as a sponsoring company. Martin Brösamle (eggs unimedia) wanted to know from Christian Kupfernagel, who and what is behind this campaign, and why he took part. 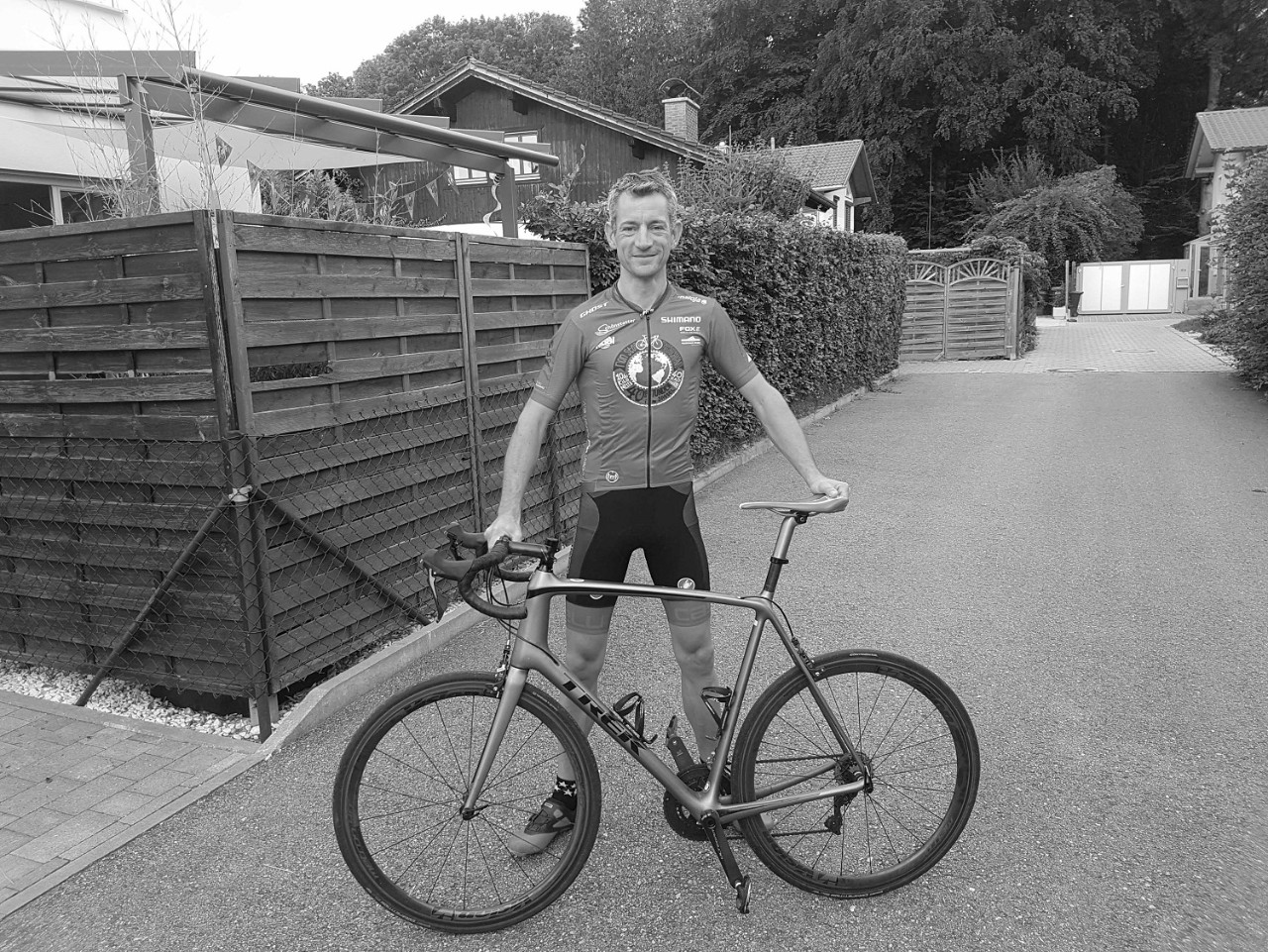 Martin Brösamle: Christian, what is behind the Cycling and Helping association?

Christian Kupfernagel: Gerhard Dashuber, a passionate cyclist and owner of a cycling shop in Garching an der Alz (in Upper Bavaria), founded the non-profit organisation in 2012. The aim of the organisation is to collect donations for disadvantaged and needy children through extreme group cycling tours. He is also the initiator and organizer of the "Nonstop through Germany" campaign. In the run-up to the trip, money and material sponsors for clothing, food, logistics, etc. were sought. In addition, each participant should find its own sponsors and collect donation funds with their assistance.

By the way, our campaign has raised 63,000 € to date and it can still be donated. This money will be donated to various aid organisations such as “Sternstunden”, “Wipalla” or the “Initiative krebskranker Kinder München e.V.” (Munich Children with Cancer Initiative). 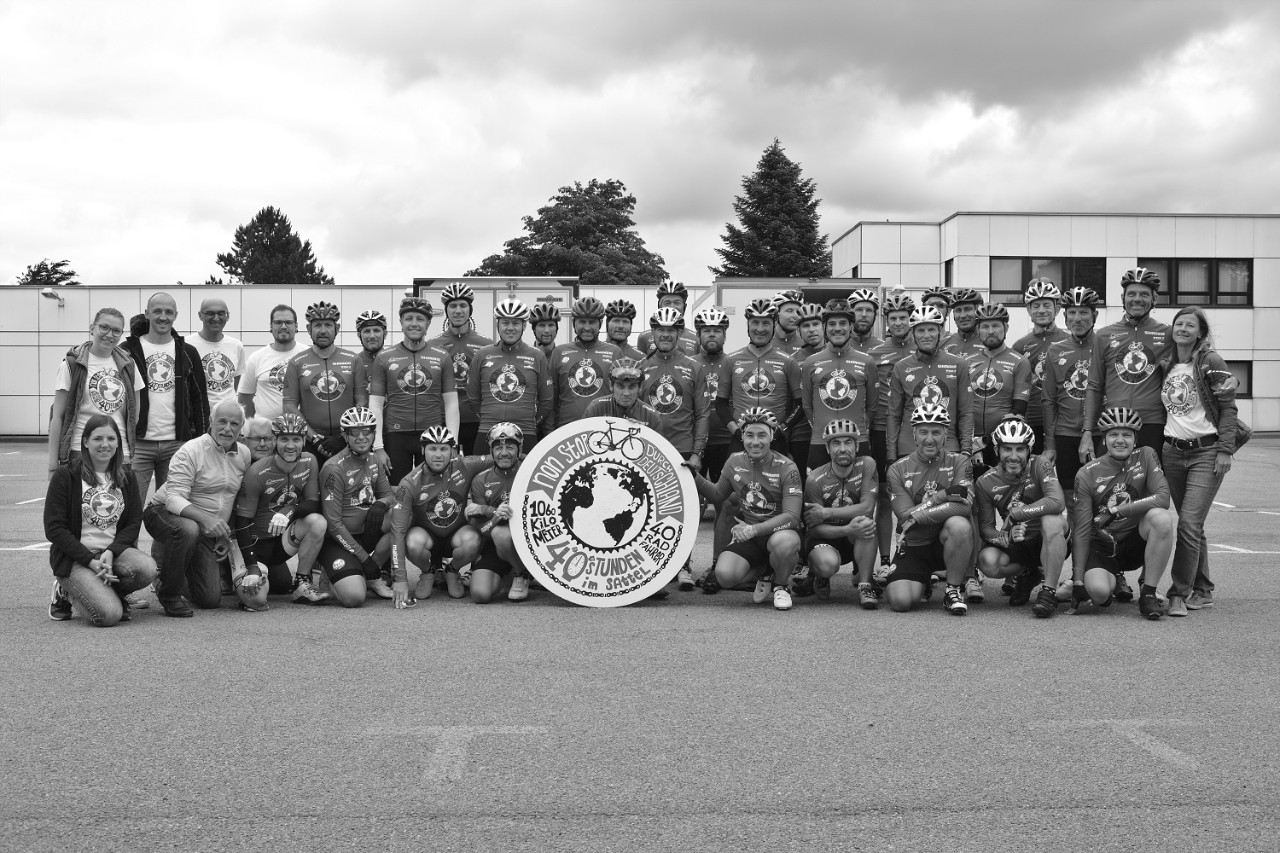 MB: How does a racing cyclist get the idea to participate?

CK: In the spring of this year, a colleague drew my attention to the fact that an organisation was still looking for two comrades-in-arms for a crazy thing. After listening to this, I couldn't get the action out of my head and applied for a starting place three weeks later.

MB: How does the application process work?

CK: You have to prove that you have already gained experience in covering extreme distances and that you have the physical condition to survive this exhausting tour.

Gerhard Dashuber probably took me because I had already successfully participated in some 24h races and mountain bike marathons. Among others, I took part in the Mountainbike Salzkammergut Trophy three times, where 210 km and 7.119 meters altitude difference need to be covered.

MB: When did you leave to Northern Germany?

CK: Meeting point with all participants and companions was on Thursday, 21.06., at 07:00 a.m. in Munich. From there, we took the coach to Flensburg, where we arrived around 09:30 p.m. After a short dinner we soon went to bed.

MB: How do you prepare the day before the big trip?

CK: On Friday the briefing by Gerhard Dashuber took place. He introduced us to the second group leader, Peter Scherrer. Afterwards all rules for the trip were discussed again. This included the procedure at the break stations, instructions in case of breakdowns, interpretation of hand signals, behaviour in case of exhaustion, use of the emergency wristbands, cycling in the “Belgian tourniquet” mode, etc... In the briefing we also talked extensively about the social background of the action.

At the end of the briefing, we were divided into two teams of 18 cyclists each and the two most important criteria for the next two days were pointed out:

That was so important because we had to rely on each other absolutely in the group over this long distance.

we cycled in on a small 27 km tour and visited the starting point in Flensburg.

MB: When did the race start?

CK: Departure from Flensburg was on Saturday, June 23rd at 04:30 a.m. At the beginning the weather had no mercy on us. Within the first hour it began to rain. After a very short time everyone was completely soaked and froze a bit. At Sehstedt, we crossed the Kiel Canal with the ferry and in the late morning the weather got better. Every two hours we had five minutes break, after another two hours ten minutes, after two hours again five minutes break and so on. In this rhythm we rode the whole day and through the night. The five or ten minutes breaks were just enough to refill power bars, go to the toilet and occasionally send a message home… 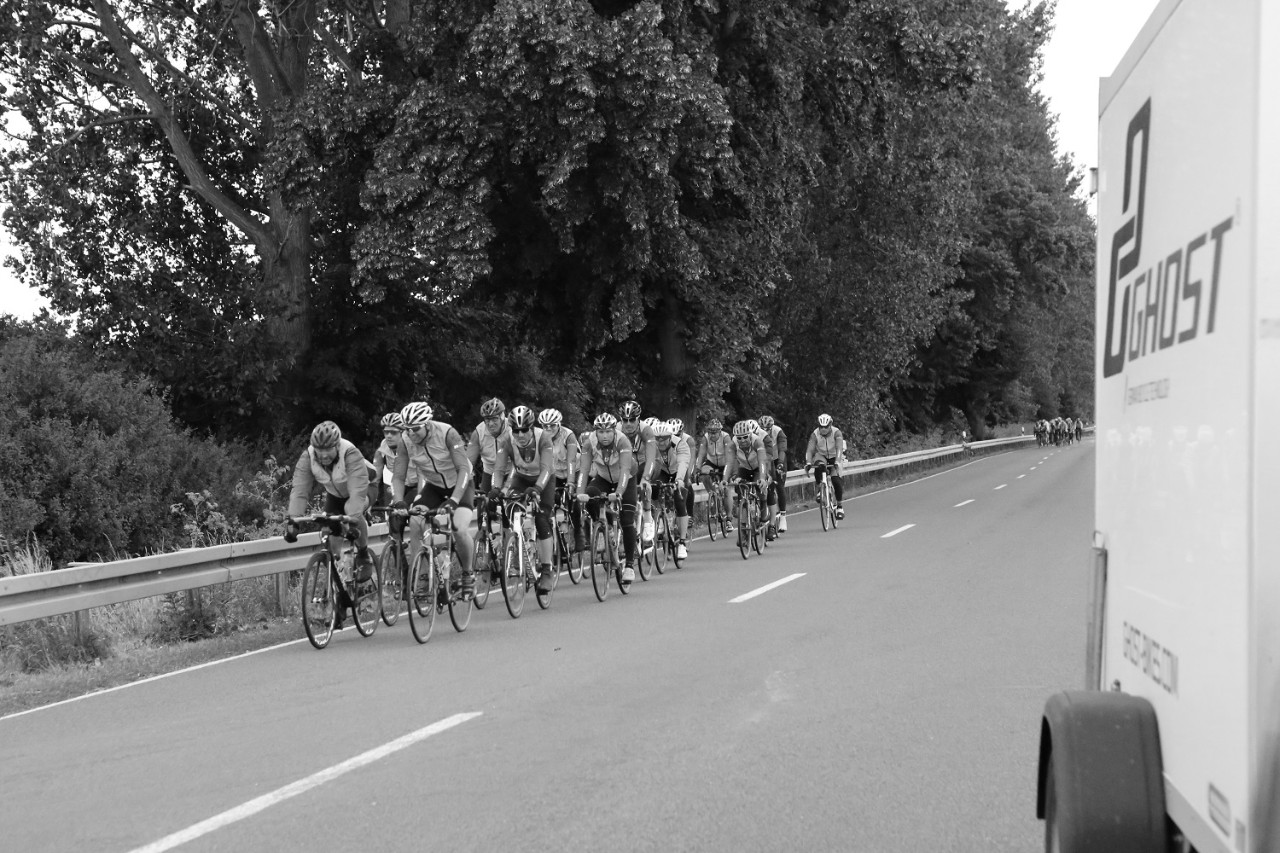 MB: How do you plan such a tour?

CK: The organization was outstanding! The whole tour was precisely planned by Gerhard Dashuber and everything was thought of. It was our group goal to cycle an average speed of 29km/h over the 40 hours and to keep the duration of the breaks exactly, so that we would arrive in Oberwössen on Sunday evening at 08:30 p.m.. Due to external factors such as rain, several diversions and road closures, traffic lights, cobblestones and tram tracks in the cities, the planned average cruising speed could not be completely maintained. After 750 km of cycling, we arrived in Waldsassen (Upper Palatinate) on Sunday morning at 10:00 a.m. with a delay we could not make up. In Waldsassen, there was a one-hour break planned for breakfast, before we should take the last 350 km to Oberwössen. Since the arrival in Oberwössen was planned at 08:30 p.m. with live music, TV team of the Bavarian Broadcasting and closing party, the organizers have made the decision that we cover a part of the route with the help of the support vehicles to make up time again.

MB: When was your low point on this tour?

CK: That must have been Sunday morning between 3 and 4 a.m.. I was cold, my buttocks hurt, and I got concentration problems due to fatigue. At that time, we were already sitting on the racing bike for more than 22 hours.

MB: Such an undertaking you probably don't do alone? Who supported you during the ride?

CK:  Three support vehicles with trailers accompanied us during the trip. They carried our  personal items, such as food, clothes, energy drinks, tools and spare parts. Without our support team this trip would have never been possible.

The support vehicles were always close to us. Shortly before a break they drove ahead and put our personal storage boxes in line. When we arrived at the break stations, apples were already cut, bananas were ready, glasses were cleaned, and bottles filled. We were incredibly grateful to the helpers for this and it also motivated us.

MB: How do you prepare for such a 40-hour tour in a team?

CK: As preparation, we did an overnight ride from Rimsting at Chiemsee to Lake Garda with our racing bikes in May. In March there was also a training camp in Italy and another tour from Garching via Passau to Vienna, that was also a fund raising initiative for children with heart problems. Thus, most of the participants could get to know each other in advance and practice to cycle in a team. Of course, you should also go cycling yourself from time to time...

MB: Why do you take part in such a strain?

CK: If you can dedicate one of your favorite hobbies to a good cause, don't hesitate. I am very happy that I was able to take part in this trip and help children. In addition, I naturally wanted to know for myself whether I could get through such a tour conditionally.

MB: What was the worst thing?

CK: It wasn't the tiredness. It wasn't the strength or condition. It was the sitting. After about 29 hours of non-stop cycling I couldn't find a painless sitting position on the saddle. Although special saddles had been produced for the tour...

MB: What motivates you when you are on the ground?

CK: It’s the group dynamics and the awareness that others feel the same way as you do. In addition, the two group leaders have always motivated us very well. You think of the good cause, the children and your sponsors, to whom you owe something. Finally there will be another break soon and you will be welcomed by nine helpers who believe in you and motivate you. At 10:00 p.m. Toni Kroos scored the 2:1 for Germany in the game against Sweden in over-time. That also put some additional pressure on the pedal. 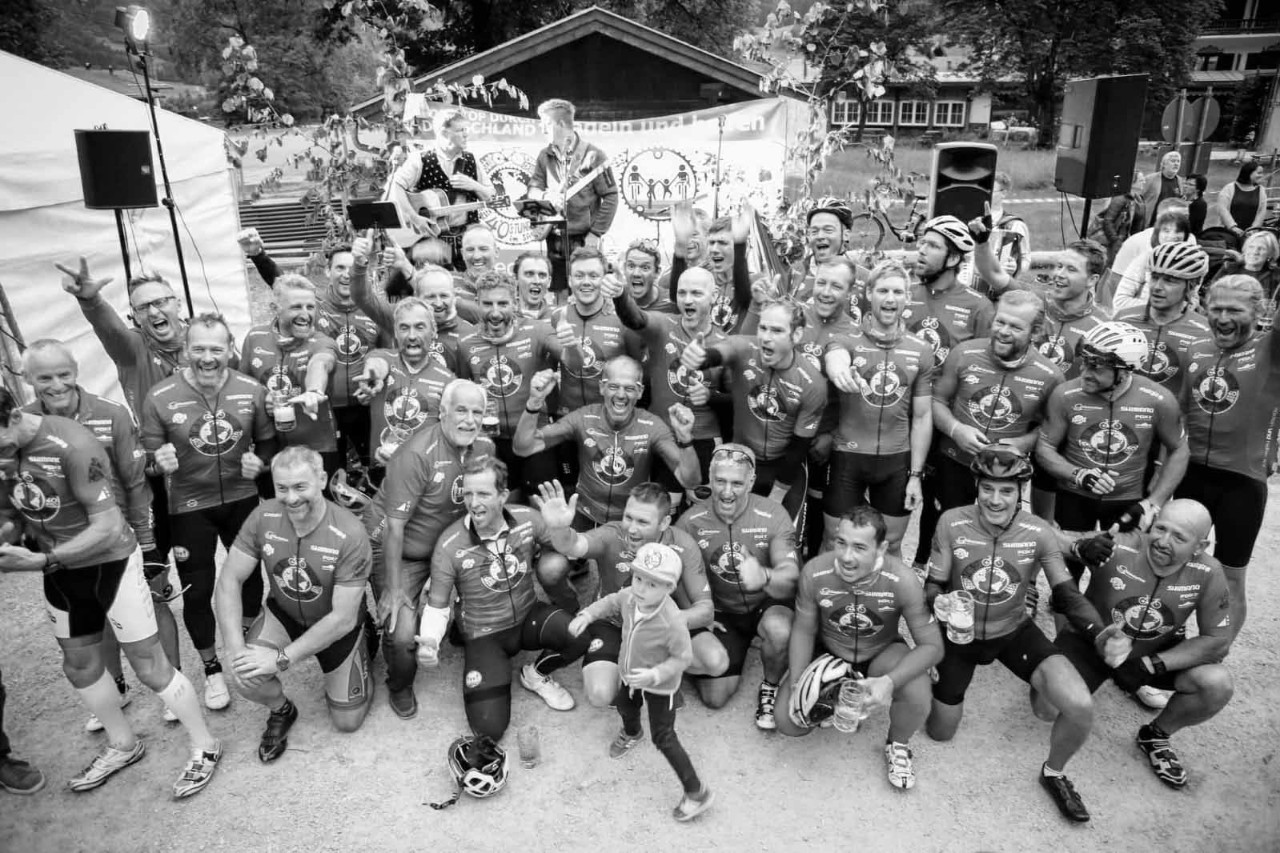 MB: How was the finish in Oberwössen on Sunday evening?

CK: Absolutely gigantic! Some of us had tears in their eyes. Everyone was touched and physically very exhausted. But when crossing the finish line and embracing the family members, friends and companions, the strains of the last two days were forgotten for the time being.

MB: Thank you very much for the interview! 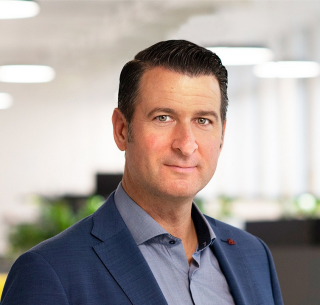