Forms and task-management with AEM Forms

The Austrian 3 Banken IT GmbH with locations in Linz, Innsbruck and Klagenfurt is an IT service provider for all IT services of the 3-Banken-Group. The 3-Bank Group is an association of the autonomous and independent regional banks Oberbank AG, Bank für Tirol und Vorarlberg AG (BTV) and BKS Bank AG and exploits synergies in the IT sector through a joint subsidiary, 3 Banken IT GmbH

3 banks IT and 3 banks group

The Austrian 3 Banken IT GmbH with locations in Linz, Innsbruck and Klagenfurt is an IT service provider for all IT services of the 3-Banken-Group. The 3-Bank Group is an association of the autonomous and independent regional banks Oberbank AG, Bank für Tirol und Vorarlberg AG (BTV) and BKS Bank AG and uses synergies in the IT sector through a joint subsidiary, 3 Banken IT GmbH. The 3-Bank Group is active in all Austrian provinces and in neighbouring countries.

The range of services offered by 3 Banken IT includes the core banking system, software architecture, payment transactions, retail, credit, IT security, computer centre operation, the printing centre and much more

The history of Adobe and the 3 Banken Gruppe goes back many years. Already in the early 2000s, the Oberbank used forms technology from Jetform. As is well known, Jetform was taken over by Adobe in 2004 and their technology stack formed the foundation for the Adobe LiveCycle technology in the following years.

In 2011 the 3 banks IT wanted to replace the Jetform Filler form technology still in use and evaluated possible successor technologies. The decision at that time was made in favour of Adobe. In a migration project, the new eFeF client and 1,200 new Adobe PDF forms were introduced in 2011. The eFeF client is the task management interface for all bank employees, through which an employee has access to all the bank's forms that are relevant to him. At that time, the forms were still static and not integrated with back-end systems. After the initial roll-out, the next step was to identify the most important 10 - 15 forms, improve them further on the basis of Adobe LiveCycle XFA technology and integrate them with backend systems. From then on, the forms could be pre-filled with data using an internal key via an XML point of contact. The response from bank employees to this enhancement was very positive and was made available for all forms over time.

In the years to come, digital workflows were developed on the basis of Adobe technology and linked to the forms. Workflows are based on a role concept, on the basis of which bank employees are only shown the forms that are relevant for them and that they are authorized to access. Authorizations are mapped using a data structure that is retrieved on a daily basis. In this way, many form and approval processes could be implemented in the bank.

The Adobe development was originally located in the Oberbank and was integrated into the 3 banks IT due to its strategic importance for all banks. Today, the internal Adobe team of the 3 Banken IT includes 10 IT employees who develop forms, model workflows, program extensions and provide integrations.

eggs unimedia was assigned with the implementation of AEM Forms and the development of the new task management.

Starting point of the project was a requirements concept of the 3 banks IT. This concept was analysed for feasibility by eggs unimedia in the run-up to the project. Afterwards eggs unimedia derived epics and user stories from it and evaluated the effort.

In the following implementation project the greenfield approach was chosen wherever possible. With this approach, the company wanted to free itself from any possible legacy problems. The project organization was based on Kanban as well as estimated and prioritized user stories.

The 3 Banken IT was responsible for the migration of the processes and the provision of points of contact for the process and task data. 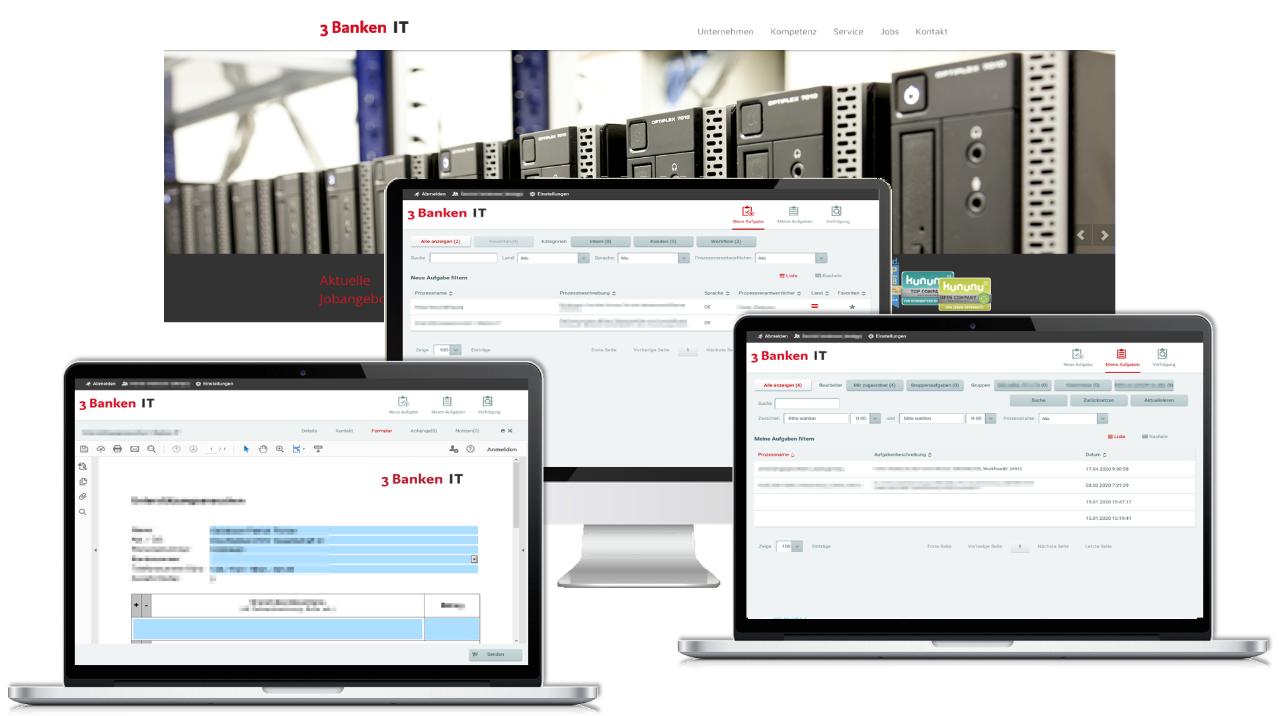 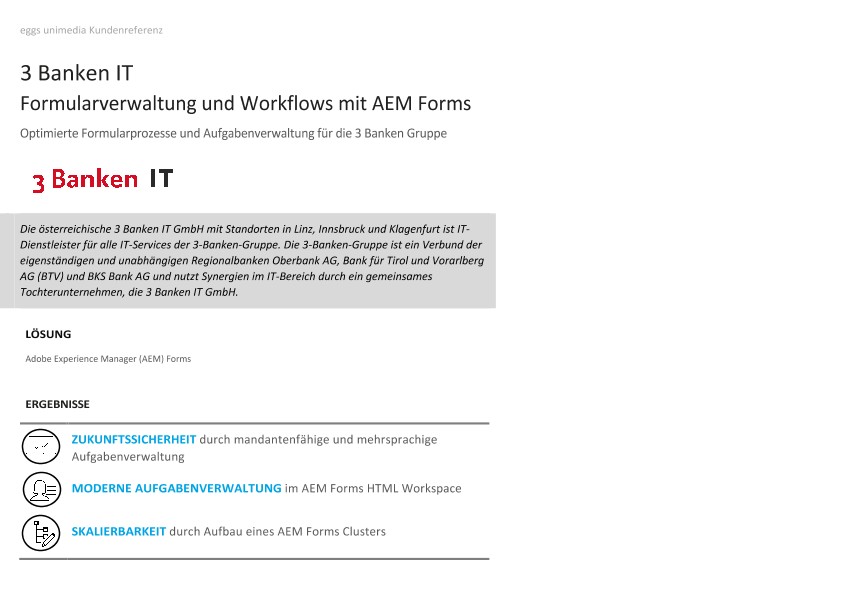